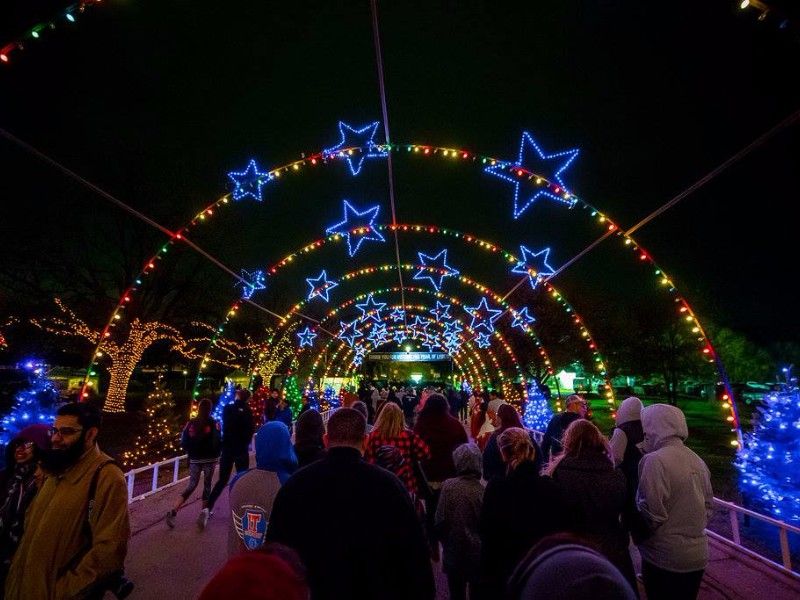 Embrace the holiday spirit this season by attending one of these great holiday events found in the Lone Star State. Visit with Santa, play with snow or view millions of lights at the events listed below. Since the holiday season is when not just Christmas but also Kwanzaa and Hanukkah occur, you’ll find an event related to all of these great holidays. Be merry this December at these family-friendly holiday events in Texas.

This holiday parade in McAllen occurs at night because it’s one of the largest illuminated parades in the Lone Star State. Bright lights are found on every one of the parade floats at this holiday event. The McAllen Holiday Parade features over 50 floats and 34 inflatable balloons. However parade attendees will also enjoy live music from over 15 bands. Make sure to arrive early to snag a great spot along the one and a half mile parade route.

The town of Cleburne is filled with over three million lights every December. Whistle Stop Christmas began in 1996 and has grown as a popular attraction due to its 12 acres of lighted area. Hulen Park in Cleburne is the center attraction at Whistle Stop Christmas. Hundreds of thousands of cars pass the lights on Westhill Drive to catch of glimpse of this magical holiday light display.

Fort Worth Parade of Lights

Kick off the holiday season by attending Fort Worth’s Parade of Lights, also known as the XTO Energy Parade of Lights. Located in downtown Fort Worth, this parade occurs every Thanksgiving weekend. Over 200,000 people head to downtown Fort Worth to watch this bright and merry parade. This parade started in 1983 with a crowd of 25,000 and only 25 parade entries. Now, the attendance has grown exponentially, and parade entries have increased to over 100. Be dazzled this holiday season by viewing over 500,000 lights in this Fort Worth parade event.

This light-covered village in College Station is the perfect place to bring the whole family. Get in the holiday spirit simply by driving through the 40 acres of light displays at Santa’s Wonderland. Or stop by Santa’s Town to visit with Santa, find some holiday gifts or go on a hayride. Santa’s Wonderland also hosts live music. However visit Santa’s Wonderland at night to catch the nightly snow that falls here. Opened from November to January, Santa’s Wonderland is one of Texas’ biggest Christmas attractions.

Celebrate Kwanzaa this holiday season at KwanzaaFest in Dallas. This annual event occurs for two days every December. Over 50,000 people attend this cheerful event that has been in operation for more than 25 years. Enjoy the family-friendly atmosphere at this free event. Shop through the numerous vendors, attend the 5K run and learn about the holiday of Kwanzaa at KwanzaaFest.

You don’t even have to get out of your car to embrace the Christmas spirit at Santa’s Ranch. This one-mile drive leads visitors through a magnificent light display that has over 100 animations and over one million lights. Located in New Braunfels, Santa’s Ranch is only 30 minutes south of Austin and can be seen from early November up until January first.

Walk into a winter wonderland of ice at the Ice Land display at Moody Gardens in Galveston. Slide down the giant ice slides or walk through the beautiful ice displays carved by master ice carvers. Moody Gardens doesn’t only feature ice sculptures but also a light display, ice skating and other holiday attractions. Moody Gardens has become one of the largest holiday destinations in the Southwest, so don’t miss out on this incredible place this holiday season.

Prairie Lights is a dazzling light display found in Grand Prairie. Located in Lynn Creek Park on Joe Pool Lake, visitors can drive through the park to view the five million holiday lights and the longest light tunnel. However don’t miss out on the other out-of-car attractions found in the Holiday Village at Prairie Lights. The Holiday Village is where Santa can be found or shop for holiday gifts here too. Be amazed by the indoor laser light show or take a stroll through the lighted walk-through forest. With plenty to see and explore at Prairie Lights, it’s no wonder why this holiday event has become a popular family-friendly attraction in the area.

Chanukah on the River

Zilker Park in Austin may be known for the iconic music festival Austin City Limits, however it’s also home to Austin Trail of Lights every holiday season. The Austin Trail of Lights is a light display in the park that has over two million lights within 40 festive displays. This month-long event also features live music and performances every night. 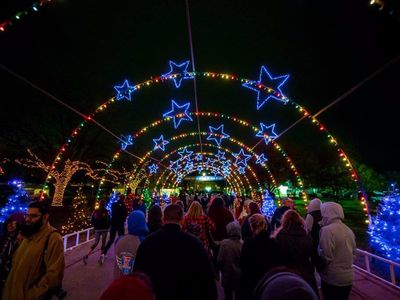